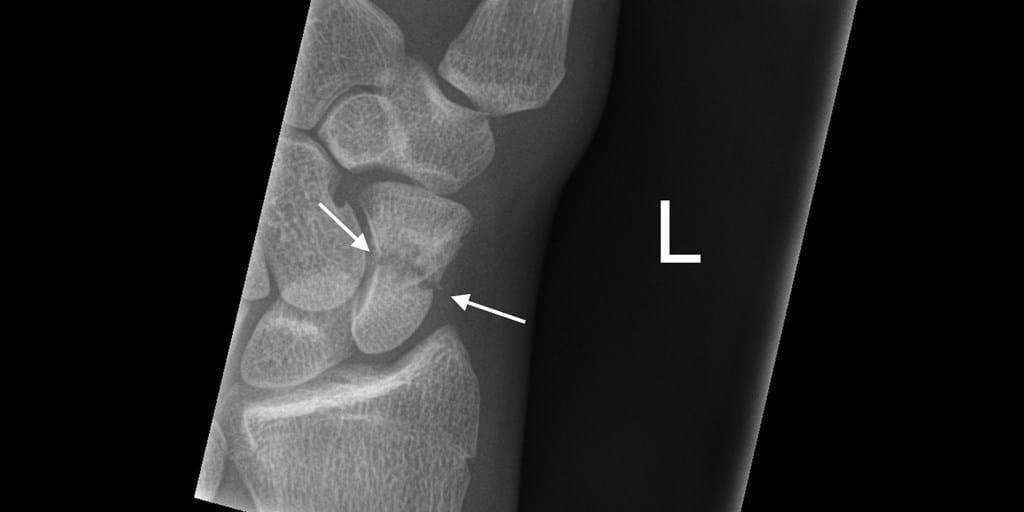 This professional athlete fell onto his outstretched hand during a team training session, and he was seen by his team physiotherapist at the time of injury. They documented that he had radial sided tenderness and arranged an x-ray. When this was reported to be ‘normal’ the player was diagnosed with a ‘wrist sprain’ and managed with a short period of splinting and unloading from gym-based training. While his acute symptoms settled he continued to complain of radial sided wrist pain and an inability to do press exercises. This was managed with analgesics, taping and bracing.

Unfortunately, he presented for an assessment one year later. A repeat x-ray confirmed a scaphoid non-union. Due to the delay in diagnosis this needed further imaging followed by surgical treatment with a vascularised bone graft. Fortunately this allowed the fracture to heal (non-union and avascular necrosis are common in this situation) and his symptoms resolved.

This case illustrates the importance of being aware that scaphoid fractures can be missed on an initial x-ray – and that a high degree of suspicion is needed. The traditional treatment protocol, of immobilising the patient in a scaphoid cast for 10 days and repeating their x-ray, is not unreasonable but leads to many patients being unnecessarily immobilised. The immobilisation is inconvenient and results in time away from work and sporting tasks. In high demand patients, like professional athletes or manual labourers, early imaging can make an early diagnosis and avoid the need for casting in many patients. If you are concerned that your patient may have a scaphoid fracture - feel free to contact us for an early appointment.