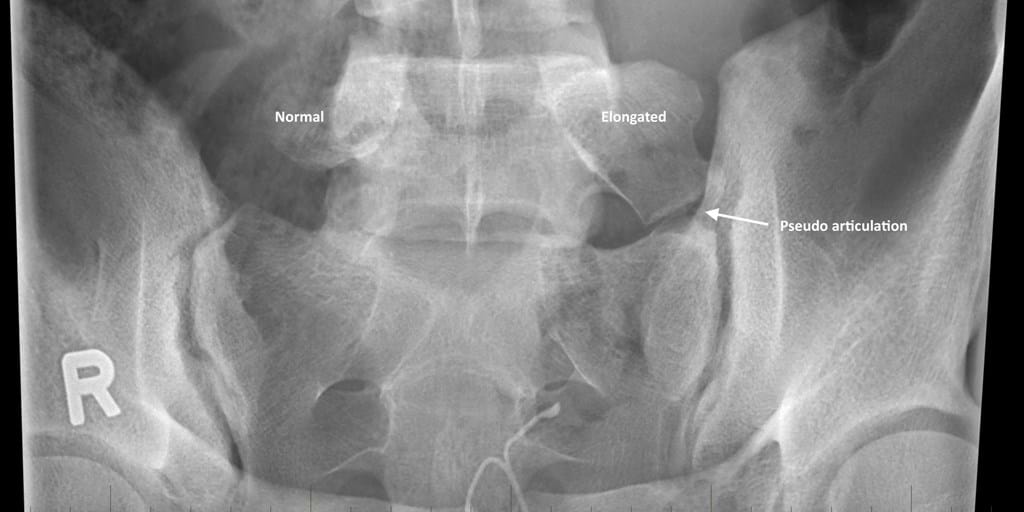 This month’s radiology case involved a 20-year-old female national level football player. She presented with a three-month history of left-side lower back pain, which had come on insidiously.

On examination, she had tenderness over the lower lumbar spine in the midline, and lumbar extension was painful.

As the player was not improving, an x-ray series of the lumbar spine was arranged. The coned AP image of the lower lumbar spine showed a transitional L5 vertebrae which was sacralised on the left. The transverse process on the right was normal.

A subsequent MRI further defined a pseudo articulation with the left sacral ala, with bone marrow oedema on either side of the pseudo arthrosis.

The player was successfully managed with a short period of rest, followed by a return to training and match play. She has continued to experience low-grade, episodic lumbar pain, which has largely been controlled with a stretching and core stability programme.

Bertolotti's syndrome is a relatively uncommon cause of lower back pain that occurs due to sacralisation of the lowest lumbar vertebral body, or lumbarisation of the uppermost sacral segment.

It is a congenital condition that does not usually become symptomatic until players enter their twenties.

Commonly reported symptoms are lower back and buttock pain, while radicular symptoms can also occur. In most cases, the transitional vertebra can be seen on AP x-rays as a "spatulated" transverse process. This can be associated with increased signal on T2 MRI sequences. The pseudo articulation can lead to restricted or altered motion at the lumbo-sacral articulation, which can either cause pain directly, or create stress at the L4 disc level.