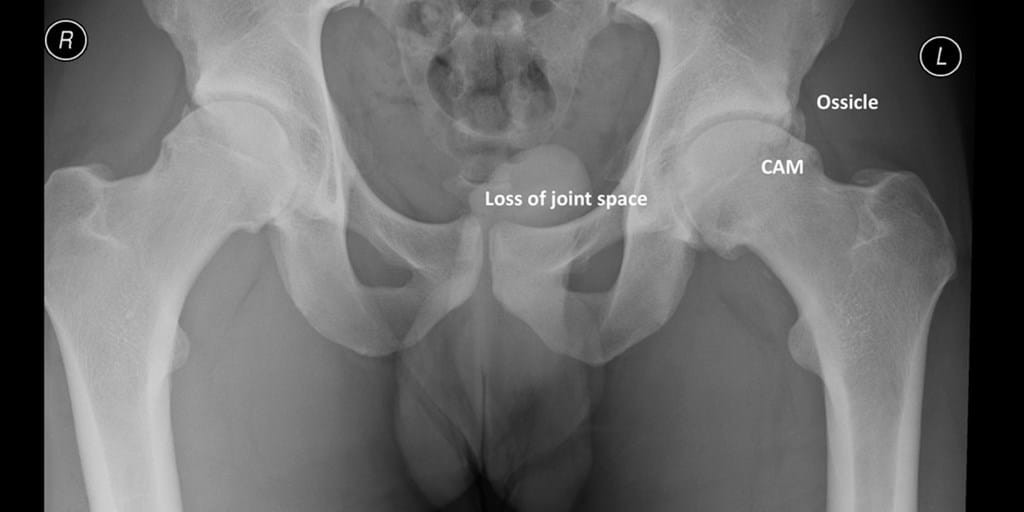 This 24-year-old football player presented with recurring bouts of left hip pain and stiffness. He also had similar, but less significant, pain in his right hip.

He estimated that he would have had more than ten episodes of pain over about five years and described multiple visits with various healthcare providers. He reported having several ultrasound examinations (which showed muscle injuries) but had never had an x-ray.

On examination, he was found to have pain with hip flexion beyond 90 degrees, reduced internal rotation (less than 10 degrees bilaterally) and pain with a quadrant test. Unfortunately, x-rays showed a CAM deformity, joint narrowing and osteophytes on the femoral head and neck. A subsequent MRI confirmed full-thickness cartilage loss.

This case unfortunately highlights that joint disease can affect people of all ages.

It also highlights the potential utility of x-rays, especially for patients with recurring or ongoing symptoms.  With the increasing numbers of patients who are sustaining major trauma (for example meniscal or anterior cruciate ligaments injuries) at a relatively young age, we are likely to see more of these young patients with “old” knees and hips.

For these patients, surgery is generally not the answer, with education and a coordinated rehabilitation programme being critical.

Given his desire to return to sport, this player was reviewed by several medical and surgical specialists. He initially showed a good response to rehabilitation, NSAID and a reduced training load. He was able to complete the season during which his symptoms developed.

Unfortunately, his pain recurred during the subsequent pre-season and became worse. He then had transient relief from corticosteroid and PRP injections but was unable to return to normal training. He had several orthopaedic opinions and it was not felt that surgical treatment was indicated. 18 months later, he was forced to retire.

Proven, non-surgical therapy for many common injuries. Reduce pain and inflammation with PRP.