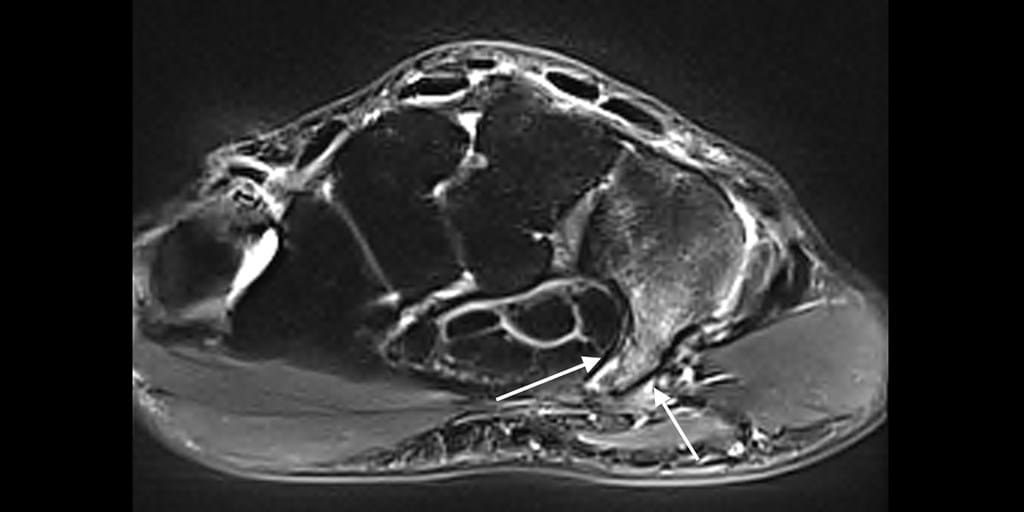 This 42-year-old male recreational football player presented with an eight-week history of hand and wrist pain following a fall onto his right hand. He was found to have localised tenderness over the volar aspect of his wrist and mild discomfort with gripping activities.

In this case a routine x-ray series of the wrist was completed at the time of his injury and again several weeks later. Both of these sets of images were normal. Carpal tunnel views, a dedicated view which profiles the hook of hamate, were not completed. A subsequent MRI scan showed a comminuted, displaced fracture through the tip of the hook of the hamate with a small (6 mm) bony fragment at the flexor retinaculum attachment.

This player was diagnosed with a hook of hamate fracture. As the fracture fragment was very small he was managed with a period of relative rest. He was able to run and play running-based sport within a few weeks of his injury. He had to avoid movements at work (like using a hammer) that aggravated his symptoms but reported a progressive improvement in his symptoms over a period of four months. At this point he was able to return to all normal activities.