Radiology Review - Why does the radiologist think there is a fracture...? 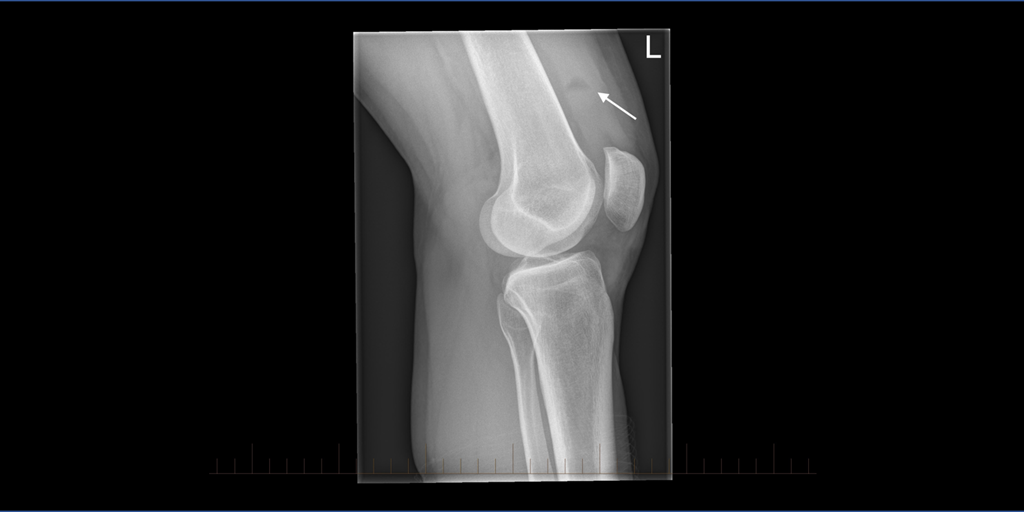 This 54-year-old woman presented after an innocuous twisting injury sustained while playing football with her kids. During her consultation, she described a strong sense of something having ‘gone out of place’ and reported developing immediate pain and swelling. A lateral x-ray image showed a lipohaemarthrosis (with no clear cause). An MRI subsequently showed that she had ruptured her anterior cruciate ligament and had an associated subchondral fracture. Her injury was managed successfully with time and rehabilitation. She was able to return to normal activity about three months post-injury.

The key message from this case is that the presence of a lipohaemarthrosis is strongly suggestive of an intra-articular fracture and should be taken seriously. A lipohaemarthrosis is illustrated radiologically by the presence of a fat-fluid level. This is best seen on a cross table lateral x-ray view – but can be seen on all forms of imaging. Fat floats on water as it is less dense. As a result, the fatty marrow separates from the blood, forming a fat-fluid level. A lipohaemarthrosis is caused by an intra-articular fracture due to the escape of fat and blood from the bone marrow into the joint. It is commonly associated with tibial plateau fractures, distal femoral fractures, in association with a significant ligamentous injury or following a patella fracture or instability episode.

It is important to remember that many bony injuries do not cause radiologic signs of a lipohaemarthrosis. When a fat-fluid level is seen however it is important that further imaging or assessment is done to establish a clear working diagnosis.