Radiology Review - What is POPS? 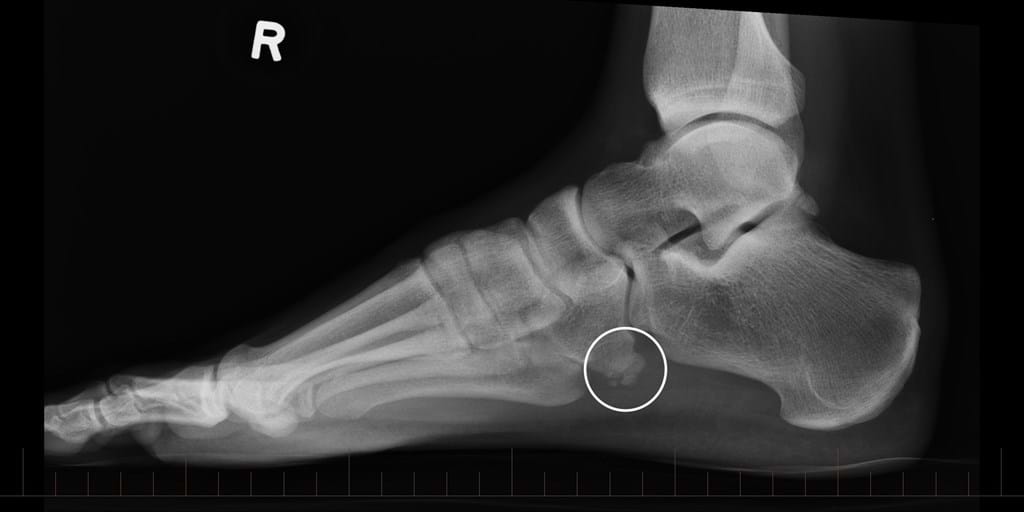 Painful os peroneum syndrome, also known as POPS is a relatively uncommon cause of lateral foot pain. This should be considered when an os peroneum, a normal variant, is seen on an x-ray image.

In this case, an eighteen-year-old football player presented with an insidious onset of localised lateral foot pain. He had recently started playing with his club’s first team and had increased his training volume. He was found to have localised tenderness over the lateral mid-foot and pain with resisted ankle eversion

This x-ray image shows an os peroneum that is irregular, sclerotic and fragmented. On the asymptomatic side there is also an os however it is round and well corticated.

An os peroneum is an accessory ossicle located within the peroneus longus tendon. They are a common incidental finding. They are unilateral in 40% of cases and can be bipartate. The term POPS describes a wide spectrum of conditions, including fractures or diastases, and may cause tenosynovitis or even rupture of the peroneal tendon. Two main forms of POPS have been described in the literature, acute and chronic. The acute form occurs as a result of trauma and is commonly associated with an ankle inversion injury. This can cause a fracture or diastasis of the os peroneum. This case is more typical of the ‘chronic’ form. In most cases conservative treatment is effective. Surgical excision is an option when the symptoms are more refractory.

This player was diagnosed with painful os peroneum syndrome (known as POPS). He was managed with a short period of rest, a lateral posted orthotic and a change in footwear. He was able to continue to train in a limited capacity and returned to normal team training after four weeks. Given that the player recovered relatively quickly no further imaging was done in this case. If the pain had been more significant or had persisted for a longer period of time, further imaging might have been useful. An MRI scan would be expected to show a diffuse increase in signal within the ossicle and changes within the peroneum longus tendon (consistent with tendinopathy). MRI would also help rule out other potential causes of his symptoms.