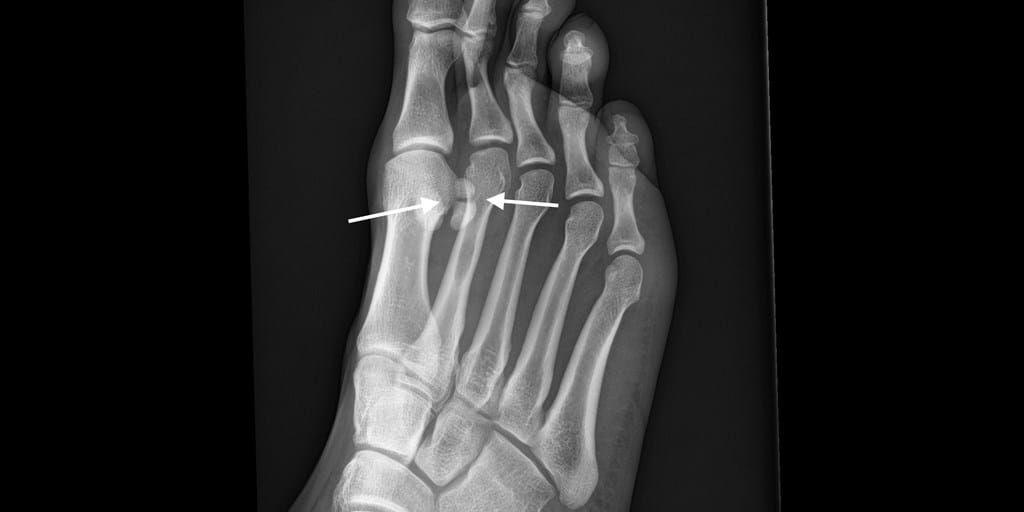 There are a variety of potential causes for forefoot pain in athletes who play running-based sports. An injury to the sesamoids is one of these potential problems. While the pain is generally highly localised (and is associated with localised tenderness) the diagnosis is often quite delayed. Part of the reason for this is that often the patient’s x-rays are reported to be normal. As this image highlights though this is his is not always the case.

This 28-year-old recreational football player presented following an acute injury to his forefoot. He describes feeling sudden and severe pain as he went to push off to sprint. This was on a background of several months of plantar forefoot pain. On examination, he walked with a limp, was unable to hop or toe raise and had exquisite tenderness over the lateral sesamoid.

Sesamoid problems can be very difficult to treat. This player was managed initially with an orthotic (with a medial post and cut out for the first ray) in a walking boot. He wore this for a six week period. At this point, his symptoms had improved but not resolved. He then spent a further six weeks in a supportive sports shoe and the orthotic. At five month follow-up he remained symptomatic – however, is much better. At this point, he did not want to consider more invasive options (including an injection or surgical treatment) and is going to continue to manage this with time and observation.

The medial and lateral sesamoid bones act as pulleys for the flexor hallicus brevis (FHB) tendons and stabilize the first metatarsophalangeal joint. Sesamoid fractures are uncommon and may be mistaken for a simply bipartate sesamoid. Bipartate sesamoids are common having been reported to be present in up to 30% of people. The radiographic appearance, in this case, suggests a fracture, as the fracture fragments are not corticated along the fracture line. It may also be helpful to note that bipartate sesamoids are more common at the medial sesamoid, and therefore a bipartate lateral sesamoid should raise the level of suspicion in equivocal cases. The medial sesamoid is also more likely to be the cause of pain as it is larger and more impacted by weight-bearing.