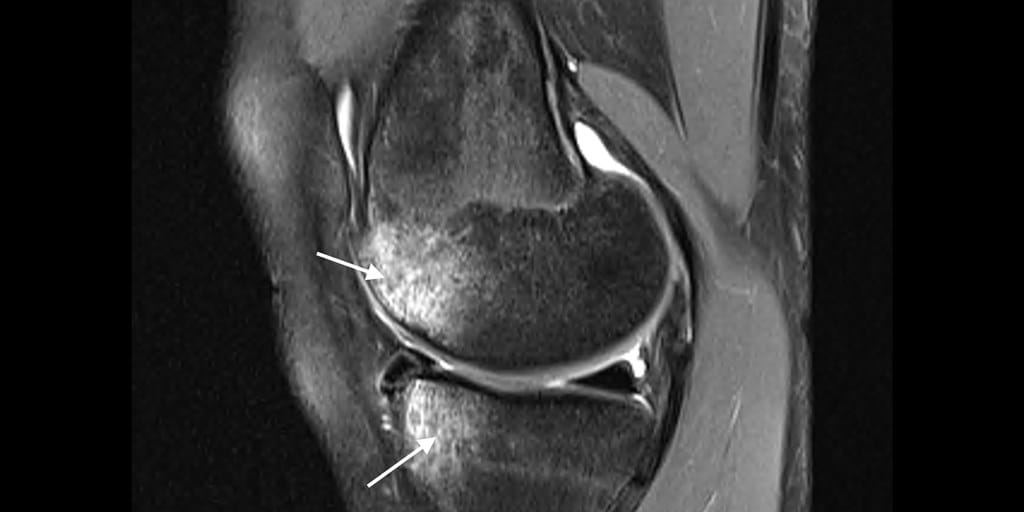 We are generally taught that rapid swelling implies a significant structural problem within the knee. Most commonly this is an injury to the anterior cruciate ligament, a patella dislocation or a fracture. This case illustrates a situation where the pathology, while still significant, is generally more benign and is more likely to recover spontaneously.

The image shown above demonstrates large bony contusions involving the anterior medial tibial plateau and medial femoral condyle (an x-ray did not show any bony abnormality). This generally occurs after a hypertension injury. In this case a young female football player prevented shortly after a hyperextension injury to her knee. She described experiencing a ‘crunching’ sensation followed by pain and almost immediate swelling. When she was assessed two weeks after her injury there was no ligamentous laxity and no evidence of patella instability. The key findings were of tenderness around the antero-medial joint line and of pain with passive extension of the knee.

This type of injury can generally be managed symptomatically with avoidance of pain provoking activity.  In this case the symptoms resolved over an eight-week period. She was then able to return to football without any ongoing issues over a four week period.

This increased signal seen on MRI represents a microtrabecular fracture. It is generally associated with direct trauma, ligament injury, or patellar dislocation. It can be the cause of prolonged pain following injury. The pattern of the bruising can give important clues to the mechanism of injury and for the diagnosis. The pattern seen here is common following hyperextension injuries. An impaction injury involving the lateral femoral condyle and posterolateral tibia is commonly associated with an ACL rupture while increased signal in the medial patella/lateral femoral condyle is seen after a patella instability episode.

Specialist knee treatment, with minimum delay. A fast-track service for knee injuries incurred within the past 4 weeks.