The Value of an X-Ray 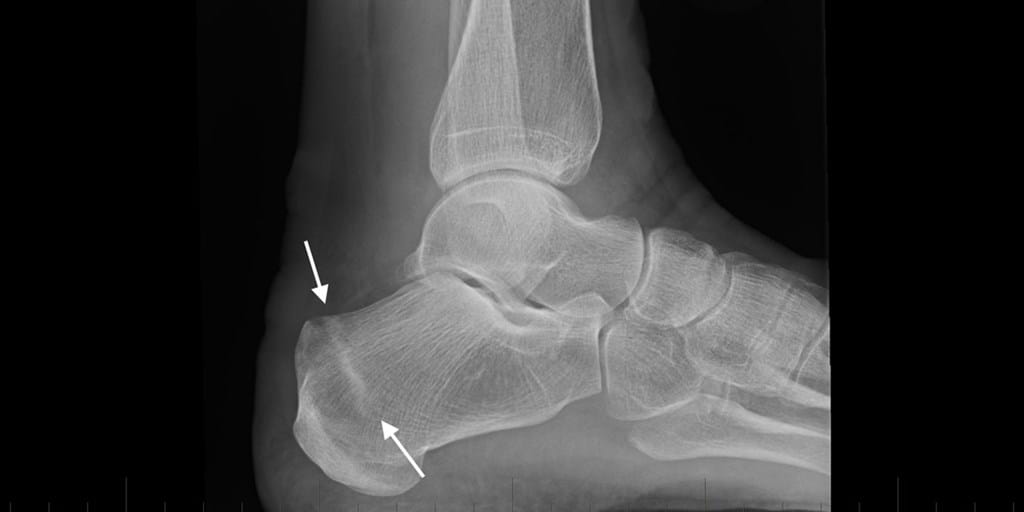 This post-menopausal woman presented with an insidious onset of heel pain. She had been diagnosed initially with Achilles tendinopathy on the basis of her heel pain and an ultrasound scan that demonstrated “changes consistent with mild tendinopathy” including modest thickening and neovascularity. Upon further questioning, she had been increasing her activity level as she was keen to walk a marathon. She had gone from about 10-20 km per week to about 60 km per week. She had no significant medical history of note.

On examination, while there was tenderness about the Achilles tendon insertion she was also found to have an antalgic gait, was unable to hop and had localised tenderness over the ‘body’ of the calcaneus. She also had pain with squeezing the calcaneus between the examiner's hands.

A lateral x-ray was confirmed and showed a sagittally orientated sclerotic line running through the posterior calcaneus. This is highly consistent with a calcaneal stress fracture and the diagnosis was revised. A subsequent MRI scan further confirmed this injury.

This case again highlights the value of an x-ray. If an ultrasound scan is being ordered in most cases an x-ray should also be done. This woman was successfully treated with a three-month period of rest. She wore a walking boot for the first two weeks (for comfort only). After this, she wore a supportive sports shoe and avoided pain-provoking activity. She was able to start a walking programme at three months and was able to return to normal activities 4-5 months after her diagnosis.

Calcaneal stress fractures are the second most common tarsal stress injury (after the navicular). The history, examination and imaging findings, in this case, are very typical of this injury. In almost all cases this injury resolves with a period of rest. Calcaneal stress fractures are often associated with low bone mineral density. As a result, consideration should also be given to obtaining a DEXA scan.