My son has a swollen knee... 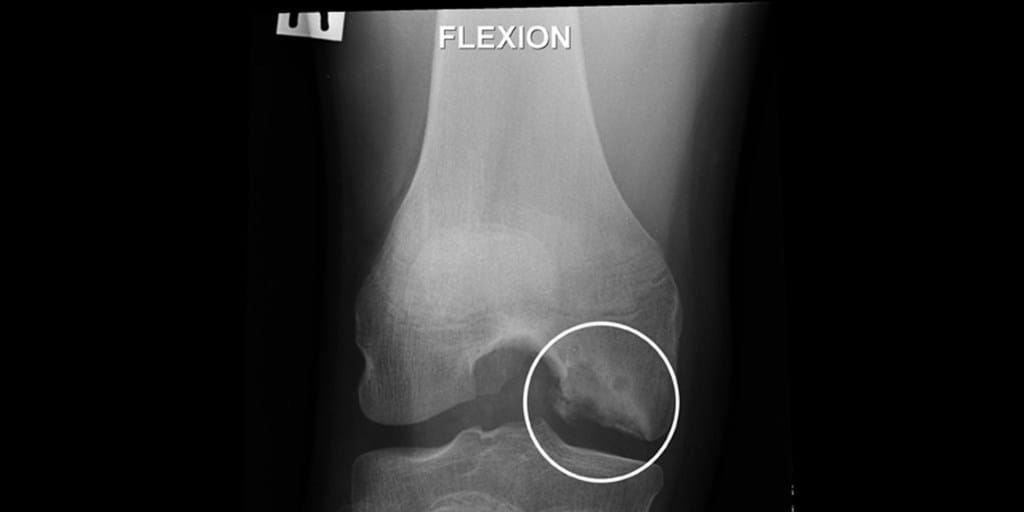 The presence of an effusion in a young athlete’s knee is never normal. When there is pain and effusion this should always be investigated further. This adolescent athlete presented with a three-month history of increasing medial knee pain. The pain was worse with activity and improved with rest. He reported noticing that his knee has been swollen after sport. On examination the player had a loss of knee flexion, a moderate effusion and had localised tenderness over the medial joint line. 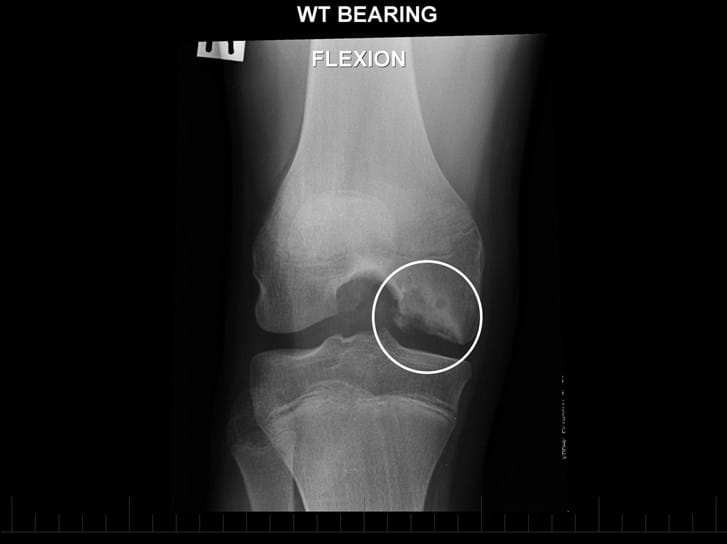 This notch X-ray image shows a massive osteochondral injury involving the medial femoral condyle. This sort of lesion is typically not as well visualised as well on a standard AP view. As a result it is a good idea to always request a notch (and a skyline view) when requesting imaging in younger patients. A subsequent MRI further demonstrated a huge osteochondral abnormality involving most of the weight-bearing surface of the medial femoral condyle. The fragment was partially, but not completely, demarcated from medial femoral condyle by a fluid signal rim. This finding suggested that it was potentially unstable.

This young athlete was treated with an arthroscopy. At the time of surgery the osteochondral fragment was found to be in place and was large enough to be reduced and repaired. The player did well post-operatively. After a careful conversation with the player and his parents, he was able to return to sport at about five months post-surgery. The potential long-term impact on the player’s knee was clearly outlined. While adolescents often do much better than adults following the treatment of an osteochondral injury it is very likely that this will injury will lead to longer term problems. Returning to sport likely further increases this risk.

OCD is a condition that affects the subchondral bone and potentially the overlying articular cartilage. Subchondral bone is first affected. As the condition progresses, there can be a change in the overlying articular cartilage. While the abnormal area may revascularise and heal, it can also become increasingly well demarcated from the surrounding bone causing loosening, separation and displacement of the fragment. This can be a major issue causing pain, swelling and mechanical symptoms. The cause of this condition is unknown and is likely the result of a combination of trauma, microvascular compromise and other predisposing factors. The most commonly affected site is the lateral aspect of the medial femoral condyle.

Children and adolescents need specialised orthopaedic treatment. The outcomes are dictated by the location and extent of the osseous and cartilage lesion (fragment size, stability, location, and separation). The age of the patient – and whether the physes are open or closed – are important considerations. It is important to emphasise to the player that returning to change of direction sports (like football) may not be good for the health of the knee in the longer term.

Specialist knee treatment, with minimum delay. A fast-track service for knee injuries incurred within the past 4 weeks.